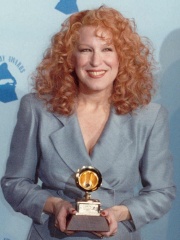 Bette Midler (; born December 1, 1945) is an American actress, comedian, singer, and author. Throughout her career, which spans over five decades, Midler has received numerous accolades, including four Golden Globe Awards, three Grammy Awards, three Primetime Emmy Awards, two Tony Awards and a Kennedy Center Honor, in addition to nominations for two Academy Awards and a British Academy Film Award. Born in Honolulu, Hawaii, Midler began her professional career in several off-off-Broadway plays, prior to her engagements in Fiddler on the Roof and Salvation on Broadway in the late 1960s. Read more on Wikipedia

Bette Midler is most famous for her singing and performances.