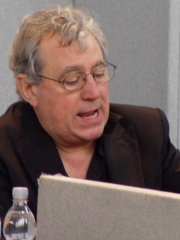 Terence Graham Parry Jones (1 February 1942 – 21 January 2020) was a Welsh comedian, director, historian, actor, writer and member of the Monty Python comedy team. After graduating from Oxford University with a degree in English, Jones and writing partner Michael Palin wrote and performed for several high-profile British comedy programmes, including Do Not Adjust Your Set and The Frost Report, before creating Monty Python's Flying Circus with Cambridge graduates Graham Chapman, John Cleese, and Eric Idle and American animator-filmmaker Terry Gilliam. Jones was largely responsible for the programme's innovative, surreal structure, in which sketches flowed from one to the next without the use of punch lines. Read more on Wikipedia

Terry Jones is most famous for being the author of the book "Monty Python and the Holy Grail."