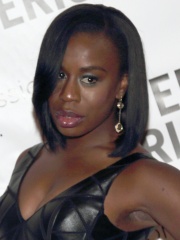 Uzoamaka Nwanneka Aduba (; born February 10, 1981) is an American actress. She is known for her role as Suzanne "Crazy Eyes" Warren on the Netflix original series Orange Is the New Black (2013–2019), for which she won an Emmy Award for Outstanding Guest Actress in a Comedy Series in 2014, an Emmy Award for Outstanding Supporting Actress in a Drama Series in 2015, and two Screen Actors Guild Awards for Outstanding Performance by a Female Actor in a Comedy Series in 2014 and 2015. She is one of only two actors to win an Emmy Award in both the comedy and drama categories for the same role, the other being Ed Asner for the character Lou Grant.Uzo Aduba appeared in films including American Pastoral (2016), Showing Roots (2016), My Little Pony: The Movie (2017), Candy Jar (2018) and Miss Virginia (2019). Read more on Wikipedia