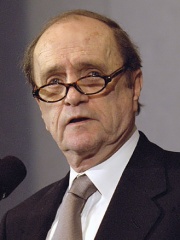 George Robert Newhart (born September 5, 1929) is an American stand-up comedian and actor, noted for his deadpan and slightly stammering delivery style. Newhart came to prominence in 1960 when his album of comedic monologues, The Button-Down Mind of Bob Newhart, became a bestseller and reached number one on the Billboard pop album chart; it remains the 20th-best selling comedy album in history. The follow-up album, The Button-Down Mind Strikes Back!, was also a success, and the two albums held the Billboard number one and number two spots simultaneously.Newhart later went into acting, starring as Chicago psychologist Robert Hartley in The Bob Newhart Show during the 1970s and then as Vermont innkeeper Dick Loudon on the 1980s series Newhart. Read more on Wikipedia

Bob Newhart is most famous for his role as Dr. Robert Hartley on the TV show The Bob Newhart Show, which aired from 1972 to 1978.