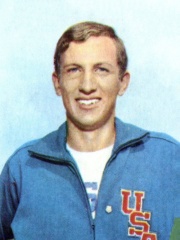 Richard Douglas Fosbury (born March 6, 1947) is an American retired high jumper, who is considered one of the most influential athletes in the history of track and field. Besides winning a gold medal at the 1968 Olympics, he revolutionized the high jump event with a "back-first" technique, now known as the Fosbury Flop, along with Debbie Brill and her Brill Bend, adopted by almost all high jumpers today. His method was to sprint diagonally towards the bar, then curve and leap backwards over the bar, which gave him a much lower center of mass in flight than traditional techniques. Read more on Wikipedia

Dick Fosbury was a high jumper and is most famous for inventing the Fosbury Flop. The Fosbury Flop is a technique in which the jumper does not bend their knees, but instead throws themselves backwards and upwards, using the momentum to propel them over the bar.