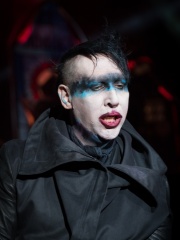 Brian Hugh Warner (born January 5, 1969), known professionally as Marilyn Manson, is an American singer, songwriter, actor, painter, and writer. He is known for his controversial stage personality and image as the lead singer of the band of the same name, which he co-founded with guitarist Daisy Berkowitz in 1989 and of which he remains the only constant member. Read more on Wikipedia

Marilyn Manson is most well known for being an American musician, actor, painter, and musician. He is known mainly for his provocative stage persona and image as the lead singer of the band Marilyn Manson. His solo albums have sold over 50 million copies worldwide.