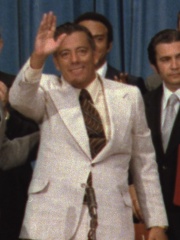 Omar Efraín Torrijos Herrera (February 13, 1929 – July 31, 1981) was the Commander of the Panamanian National Guard and military leader of Panama from 1968 to his death in 1981. Torrijos was never officially the president of Panama, but instead held titles including "Maximum Leader of the Panamanian Revolution". Read more on Wikipedia

Omar Torrijos was a Panamanian politician and military officer who served as the president of Panama from 1968 to 1981. He is most famous for negotiating the Torrijos-Carter Treaties with U.S. President Jimmy Carter, which granted Panama control of the Panama Canal in 1979.

Among politicians, Omar Torrijos ranks 4,189 out of 15,577. Before him are Judah ha-Nasi, Gnaeus Domitius Ahenobarbus, Prithviraj Chauhan, Princess Irene of the Netherlands, Andrea Dandolo, and David I of Scotland. After him are Prusias I of Bithynia, Toomas Hendrik Ilves, Juan Negrín, Eleanor of Viseu, William, Duke of Nassau, and Ranuccio I Farnese, Duke of Parma.

Others born in Panama

Among POLITICIANS In Panama