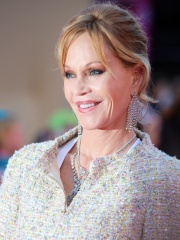 Melanie Richards Griffith (born August 9, 1957) is an American actress and film producer. She began her career in the 1970s, appearing in several independent thriller films before achieving mainstream success in the mid-1980s. Born in New York City to actress Tippi Hedren and advertising executive Peter Griffith, she was raised mainly in Los Angeles, where she graduated from the Hollywood Professional School at age 16. Read more on Wikipedia

Since 2007, the English Wikipedia page of Melanie Griffith has received more than 10,330,535 page views. Her biography is available in 55 different languages on Wikipedia making her the 372nd most popular actor.