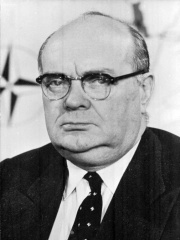 Paul-Henri Charles Spaak (25 January 1899 – 31 July 1972) was an influential Belgian Socialist politician, diplomat and statesman. Along with Robert Schuman, Alcide De Gasperi and Konrad Adenauer he was a leader in the formation of the institutions that evolved into the European Union. A member of the influential Spaak family, he served briefly in World War I before he was captured, and rose to prominence after the war as a tennis player and lawyer, becoming famous for his high-profile defence of an Italian student accused of attempting to assassinate Italy's Crown Prince in 1929. Read more on Wikipedia

Paul-Henri Spaak was a Belgian politician who helped to found the European Coal and Steel Community.

Among politicians, Paul-Henri Spaak ranks 2,448 out of 15,577. Before him are Władysław I the Elbow-high, Princess Birgitta of Sweden, Donald Tusk, Vasily I of Moscow, Giovanna of Italy, and Renée of France. After him are Adad-nirari III, Prince Aimone, Duke of Aosta, Louis Barthou, Quintillus, Robert Dudley, 1st Earl of Leicester, and Ephialtes.