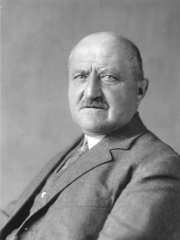 Georg Michaelis (8 September 1857 – 24 July 1936) was the chancellor of the German Empire for a few months in 1917. He was the first (and the only one of the German Empire) chancellor not of noble birth to hold the office. With an economic background in business, Michaelis' main achievement was to encourage the ruling classes to open peace talks with Russia. Read more on Wikipedia

Georg Michaelis is most famous for his work in the field of organic chemistry. He was one of the first chemists to understand the importance of the molecule's shape and how it impacts the molecule's reactivity.

Among politicians, Georg Michaelis ranks 2,625 out of 15,577. Before him are Petronilla of Aragon, Charles III of Navarre, Albert Frederick, Duke of Prussia, Gaston Doumergue, George V of Hanover, and Harald Greycloak. After him are Chaghri Beg, Moctezuma I, B. J. Habibie, Mohamed Farrah Aidid, Mentuhotep III, and Emperor Go-Sai.