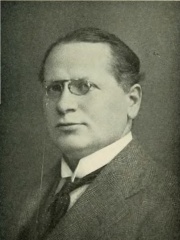 Maxim Maximovich Litvinov (Russian pronunciation: [mɐkˈsʲim mɐkˈsʲiməvʲɪtɕ lʲɪˈtvʲinəf]; born Meir Henoch Wallach-Finkelstein; 17 July 1876 – 31 December 1951) was a Russian revolutionary and prominent Soviet politician. A strong advocate of diplomatic agreements leading towards disarmament, Litvinov was influential in making the Soviet Union a party to the Kellogg–Briand Pact of 1928 and was chiefly responsible in 1929 for adoption of the so-called Litvinov Protocol, a multilateral agreement bringing Kellogg-Briand into force between the Soviet Union and a number of neighboring states. Read more on Wikipedia

Maxim Litvinov was a Soviet diplomat who was most famous for his role in negotiating the Treaty of Non-Aggression between the Soviet Union and Nazi Germany.

Among politicians, Maxim Litvinov ranks 2,163 out of 15,710. Before him are Abgar V, Mohammed VI of Morocco, Princess Birgitta of Sweden, Constantine Laskaris, Ahmed Hassan al-Bakr, and Milan I of Serbia. After him are Ahaziah of Israel, Eugène Edine Pottier, Roman Herzog, Li Peng, Antonia Minor, and Stefan Löfven.