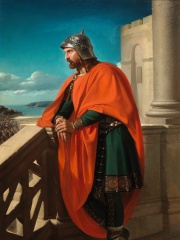 Athaulf was most famous for being the last of the Visigoth kings to rule over the Kingdom of the Visigoths. He ruled from 415 to 418, before it was taken over by the Roman Empire.

Page views of Athaulves by language

Among politicians, Athaulf ranks 1,513 out of 15,577. Before him are Ferenc Szálasi, Pepi II Neferkare, Ḫattušili III, Archduchess Maria Elisabeth of Austria, Stjepan Mesić, and Theodoric I. After him are Carlos I of Portugal, Halimah bint Abi Dhuayb, Gallienus, Paul Biya, David IV of Georgia, and Giuliano de' Medici, Duke of Nemours.