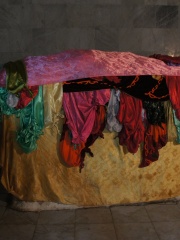 Sheikh ‘Adī ibn Musāfir (Kurdish: شێخ ئادی‎, romanized: Şêx Adî, Arabic: الشيخ عدي بن مسافر‎ born 1072-1078, died 1162) was a Muslim sheikh of Arab origin, born in the 1070s in the village of Bait Far, in the Beqaa Valley of present-day Lebanon. ‘Adīs house of his birth is a place of pious pilgrimage to this day. The Yazidi consider him an avatar of Tawûsê Melek, which means "Peacock Angel". Read more on Wikipedia

Sheikh Adi ibn Musafir is most famous for being a Sufi mystic who was born in Jerusalem. He is also known for his contributions to the development of the Qadiri order of Sufism.

Among religious figures, Sheikh Adi ibn Musafir ranks 792 out of 2,272. Before him are Medardus, Ananias of Damascus, Antipope Clement VIII, Arnold of Brescia, Saint Eligius, and Safi-ad-din Ardabili. After him are Mary Jane Kelly, Servatius of Tongeren, Ebussuud Efendi, Clemens August Graf von Galen, Leonard of Noblac, and Archduke Rudolf of Austria.