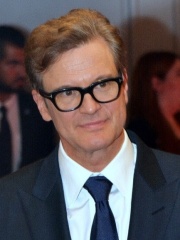 Colin Andrew Firth (born 10 September 1960) is an English actor. He is the recipient of various accolades, including an Academy Award, a Golden Globe Award, two European Film Awards, two British Academy Film Awards, and three Screen Actors Guild Awards, as well as the Venice Film Festival Volpi Cup for Best Actor. In 2010, his portrayal of King George VI in Tom Hooper's The King's Speech won him the Academy Award for Best Actor.He was identified in the mid 1980s with the "Brit Pack" of rising young British actors, undertaking a challenging series of roles, including leading roles in A Month in the Country (1987), Tumbledown (1988) and Valmont (1989). Read more on Wikipedia

Colin Firth is most famous for his portrayal of Mr. Darcy in the 1995 BBC adaptation of Jane Austen's Pride and Prejudice.