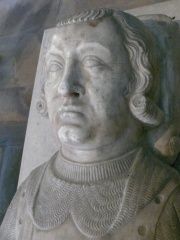 Charles of Valois (12 March 1270 – 16 December 1325), the fourth son of King Philip III of France and Isabella of Aragon, was a member of the House of Capet and founder of the House of Valois, whose rule over France would start in 1328. Charles ruled several principalities. He held in appanage the counties of Valois, Alençon (1285), and Perche. Read more on Wikipedia

Charles, Count of Valois, was the youngest son of King Philip III and Queen Jeanne. He was the grandson of King Louis IX. Charles was born in 1270 and died in 1325. Charles was most famous for being a member of the House of Capet and for being the King of France from 1322 to 1328.

Page views of Charles, Count of Valois by language

Among noblemen, Charles, Count of Valois ranks 56 out of 842. Before him are Grand Duke Michael Alexandrovich of Russia, Raynald of Châtillon, Princess Alice of the United Kingdom, Robert Guiscard, Philippe II, Duke of Orléans, and Elizabeth Charlotte, Madame Palatine. After him are Lady Jane Grey, Jeanne d'Albret, Archduke Charles, Duke of Teschen, Grand Duchess Maria Nikolaevna of Russia, Camilla, Duchess of Cornwall, and Fatma Sultan.

Among people born in 1270, Charles, Count of Valois ranks 2. Before him is William Wallace. After him are Rudolf II, Duke of Austria, Haakon V of Norway, Namdev, Theodore Metochites, Isabella of Burgundy, Queen of Germany, Lancelotto Malocello, Theodore Svetoslav of Bulgaria, Juliana Falconieri, Cino da Pistoia, and Nicholas of Lyra. Among people deceased in 1325, Charles, Count of Valois ranks 1. After him are Amir Khusrow, Denis of Portugal, Yury of Moscow, Ghiyath al-Din Tughluq, Nizamuddin Auliya, Ismail I of Granada, and Stefan Vladislav II.