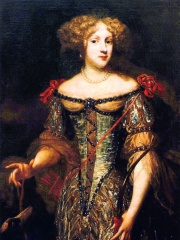 Princess Elizabeth Charlotte of the Palatinate (German: Prinzessin Elisabeth Charlotte von der Pfalz), (French: Princesse Élisabeth-Charlotte du Palatinat); known as Liselotte von der Pfalz, 27 May 1652 – 8 December 1722) was a German member of the House of Wittelsbach and, as Madame (Duchesse d'Orléans), the second wife of Philippe I, Duke of Orléans (younger brother of Louis XIV of France), and mother of Philippe II, Duke of Orléans, France's ruler during the Regency. She gained literary and historical importance primarily through preservation of her correspondence, which is of great cultural and historical value due to her sometimes very blunt descriptions of French court life and is today one of the best-known German-language texts of the Baroque period. Although she had only two surviving children, she not only became the ancestress of the House of Orléans, which came to the French throne with Louis Philippe I, the so-called "Citizen King" from 1830 to 1848, but also became the ancestress of numerous European royal families, so she was also called the "Grandmother of Europe". Read more on Wikipedia

Since 2007, the English Wikipedia page of Elizabeth Charlotte, Madame Palatine has received more than 670,481 page views. Her biography is available in 34 different languages on Wikipedia (up from 33 in 2019). Elizabeth Charlotte, Madame Palatine is the 55th most popular nobleman (down from 45th in 2019), the 252nd most popular biography from Germany (down from 188th in 2019) and the 2nd most popular German Nobleman.

Madame Palatine is most famous for being the mother of Louis XVI and Marie Antoinette.

Among noblemen, Elizabeth Charlotte, Madame Palatine ranks 55 out of 842. Before her are Edward the Black Prince, Grand Duke Michael Alexandrovich of Russia, Raynald of Châtillon, Princess Alice of the United Kingdom, Robert Guiscard, and Philippe II, Duke of Orléans. After her are Charles, Count of Valois, Lady Jane Grey, Jeanne d'Albret, Archduke Charles, Duke of Teschen, Grand Duchess Maria Nikolaevna of Russia, and Camilla, Duchess of Cornwall.