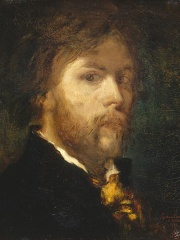 Gustave Moreau (French: [mɔʁo]; 6 April 1826 – 18 April 1898) was a French artist and an important figure in the Symbolist movement. Jean Cassou called him "the Symbolist painter par excellence".: 110 p.  He was an influential forerunner of symbolism in the visual arts in the 1860s, and at the height of the symbolist movement in the 1890s, he was among the most significant painters. Art historian Robert Delevoy wrote that Moreau "brought symbolist polyvalence to its highest point in Jupiter and Semele.": 147 p.  He was a prolific artist who produced over 15,000 paintings, watercolors, and drawings. Read more on Wikipedia

Gustave Moreau is most famous for his paintings of scenes from the Bible and from Greek mythology.

Among painters, Gustave Moreau ranks 102 out of 1,428. Before him are Duccio, Hans Memling, Lili Elbe, Oskar Kokoschka, Canaletto, and Jean-Baptiste-Siméon Chardin. After him are Simone Martini, Guido Reni, Franz Marc, Apelles, Ivan Aivazovsky, and Francis Bacon.