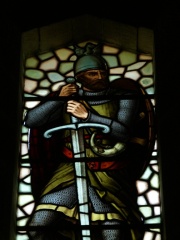 Sir William Wallace (Scottish Gaelic: Uilleam Uallas, pronounced [ˈɯʎam ˈuəl̪ˠəs̪]; Norman French: William le Waleys; born c. 1270, died 23 August 1305) was a Scottish knight who became one of the main leaders during the First War of Scottish Independence.Along with Andrew Moray, Wallace defeated an English army at the Battle of Stirling Bridge in September 1297. He was appointed Guardian of Scotland and served until his defeat at the Battle of Falkirk in July 1298. Read more on Wikipedia

Since 2007, the English Wikipedia page of William Wallace has received more than 8,139,201 page views. His biography is available in 74 different languages on Wikipedia making him the 11th most popular military personnel.