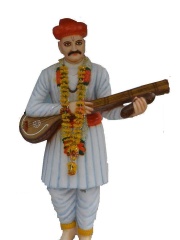 Namdev (Pronunciation: [naːmdeʋ]), also transliterated as Nam Dayv, Namdeo, Namadeva, (traditionally, c. 26 October 1270 – c. 3 July 1350) was a Marathi Hindu poet and saint from Narsi, Hingoli, Maharashtra, India within the Varkari tradition of Hinduism. He lived as a devotee of Lord Vitthal (Krishna) of Pandharpur.The details of Namdev's life are unclear. He is the subject of many miracle-filled hagiographies composed centuries after he died. Read more on Wikipedia

Namdev is most famous for being a poet and saint. He wrote and composed a number of bhajans, or devotional songs, in Marathi.

Page views of Namdevs by language

Among people born in 1270, Namdev ranks 5. Before him are William Wallace, Charles, Count of Valois, Rudolf II, Duke of Austria, and Haakon V of Norway. After him are Theodore Metochites, Isabella of Burgundy, Queen of Germany, Lancelotto Malocello, Theodore Svetoslav of Bulgaria, Juliana Falconieri, Cino da Pistoia, and Nicholas of Lyra. Among people deceased in 1350, Namdev ranks 4. Before him are Philip VI of France, Alfonso XI of Castile, and Ibn Qayyim al-Jawziyya. After him are Odo IV, Duke of Burgundy, Cápac Yupanqui, Yoshida Kenkō, Tribhuwana Wijayatunggadewi, Juan Ruiz, Johannes de Muris, and Dafydd ap Gwilym.