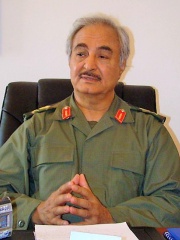 Field Marshal Khalifa Belqasim Haftar (Arabic: خليفة بلقاسم حفتر, romanized: Ḵalīfa Bilqāsim Ḥaftar; born 7 November 1943) is a Libyan-American politician, military officer, and the commander of the Tobruk-based Libyan National Army (LNA). On 2 March 2015, he was appointed commander of the armed forces loyal to the elected legislative body, the Libyan House of Representatives.Haftar was born in the Libyan city of Ajdabiya. He served in the Libyan army under Muammar Gaddafi, and took part in the coup that brought Gaddafi to power in 1969. Read more on Wikipedia

Khalifa Haftar is a Libyan military officer who is most famous for his role in the Libyan Civil War. He is the commander of the self-proclaimed Libyan National Army and has been fighting against the forces of the UN-backed Government of National Accord.

Among MILITARY PERSONNELS In Libya

Among military personnels born in Libya, Khalifa Haftar ranks 1. After him are Abdul Fatah Younis (1944).