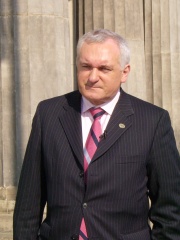 Since 2007, the English Wikipedia page of Bertie Ahern has received more than 506,783 page views. His biography is available in 46 different languages on Wikipedia making him the 8,961st most popular politician.

Among politicians, Bertie Ahern ranks 8,915 out of 14,801. Before him are Nepherites I, Prince Munetaka, Prince Thomas, Duke of Genoa, Ibrahim al-Jaafari, Eochaid, son of Rhun, and Charles J. Guiteau. After him are Princess Friederike Luise of Prussia, Mohammad Javad Zarif, John C. Breckinridge, Princess Marie of Hesse-Kassel, Fayzulla Khodzhayev, and Grand Duke Alexei Mikhailovich of Russia.