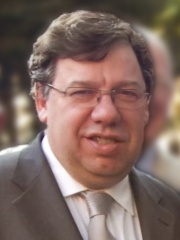 Brian Bernard Cowen (born 10 January 1960) is an Irish former politician who served as Taoiseach and Leader of Fianna Fáil from 2008 to 2011. Cowen was elected to Dáil Éireann in 1984, for the constituency of Laois–Offaly and served in a number of ministerial roles, including Minister for Labour from 1992 to 1993, Minister for Transport, Energy and Communications from 1993 to 1994, Minister for Health and Children from 1997 to 2000, Minister for Foreign Affairs from 2000 to 2004, Minister for Finance from 2004 to 2008 and Tánaiste from 2007 to 2008.Cowen was elected Leader of Fianna Fáil in May 2008, upon the resignation of Bertie Ahern, and was nominated by Dáil Éireann to replace him as Taoiseach. Weeks after taking office, his administration faced the Irish financial and banking crises. Read more on Wikipedia

Among politicians, Brian Cowen ranks 5,943 out of 15,710. Before him are Maurice, Landgrave of Hesse-Kassel, Zhang Juzheng, Étienne de Silhouette, Amar-Sin, Boris Pugo, and Prince Louis Ferdinand of Prussia. After him are Charles August, Crown Prince of Sweden, Nicole, Duchess of Lorraine, Petar Stambolić, Luís Cabral, Walter Simons, and Jinpyeong of Silla.