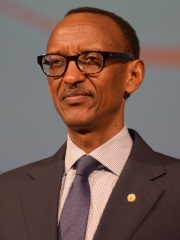 Paul Kagame (; born 23 October 1957) is a Rwandan politician and former military leader. He is the sixth and current president of Rwanda, having taken office in 2000. Kagame previously commanded the Rwandan Patriotic Front (RPF), a Uganda-based rebel force which invaded Rwanda in 1990 and was one of the parties of the conflict during the Rwandan Civil War and the Rwandan genocide. Read more on Wikipedia

Paul Kagame is the president of Rwanda and is most famous for his role in ending the Rwandan genocide.

Among politicians, Paul Kagame ranks 4,039 out of 15,710. Before him are John George II, Elector of Saxony, Petru Groza, Margaret, Countess of Tyrol, King Cheng of Zhou, Marino Faliero, and Marcus Antonius. After him are Charles-Joseph, 7th Prince of Ligne, Ko Yong-hui, Louis Henri, Duke of Bourbon, Mike Pompeo, Victor Klemperer, and Ivanoe Bonomi.

Among POLITICIANS In Rwanda