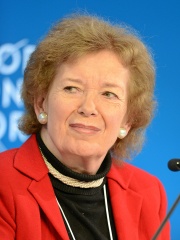 Mary Therese Winifred Robinson (Irish: Máire Mhic Róibín; née Bourke; born 21 May 1944) is an Irish independent politician who served as the seventh President of Ireland from December 1990 to September 1997, becoming the first woman to hold this office. She also served as United Nations High Commissioner for Human Rights from 1997 to 2002 and a Senator for the University of Dublin from 1969 to 1989. She first rose to prominence as an academic, barrister and campaigner. Read more on Wikipedia

Among politicians, Mary Robinson ranks 6,680 out of 15,710. Before her are Doubravka of Bohemia, Dersu Uzala, André Tardieu, Nguyễn Khánh, William of Modena, and Arnulf III, Count of Flanders. After her are Catherine of Brandenburg, Antipater II of Macedon, Nicholas Romanov, Prince of Russia, Abdul-Aziz ibn Abdullah Al ash-Sheikh, Frederick I, Margrave of Baden, and Augustus, Grand Duke of Oldenburg.