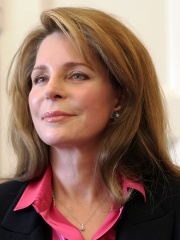 Noor Al-Hussein (Arabic: نور الحسين‎; born Lisa Najeeb Halaby; August 23, 1951) is an American-born Jordanian philanthropist and activist who was Queen of Jordan as the fourth wife of King Hussein from their marriage in 1978 until his death in 1999. Noor is the longest-standing member of the Board of Commissioners of the International Commission on Missing Persons. As of 2011, she is president of the United World Colleges movement and an advocate of the anti-nuclear weapons proliferation campaign Global Zero. Read more on Wikipedia

Page views of Queen Noor of Jordans by language

Among noblemen, Queen Noor of Jordan ranks 318 out of 843. Before her are Emperor Shang of Tang, Princess Maria Amélia of Brazil, Henry IX, Duke of Bavaria, Neferirkare Kakai, Frederica of Mecklenburg-Strelitz, and William III, Duke of Aquitaine. After her are Johann II, Duke of Saxe-Weimar, William, Duke of Austria, Elizabeth Charlotte of the Palatinate, Electress of Brandenburg, Charles Alexander, Duke of Württemberg, Grand Duchess Maria Vladimirovna of Russia, and Madeleine de La Tour d'Auvergne.

Among NOBLEMEN In United States

Among noblemen born in United States, Queen Noor of Jordan ranks 2. Before her are Liliʻuokalani (1838). After her are Princess Leonore, Duchess of Gotland (2014).