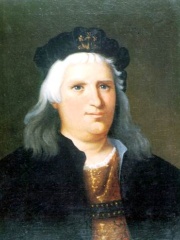 John Corvinus was a Hungarian nobleman and a descendant of the Hunnic ruler Attila the Hun. He is most famous for his role in the attempted assassination of King Matthias I of Hungary in 1437.

Among politicians, John Corvinus ranks 3,744 out of 15,577. Before him are Valdemar, King of Sweden, Francis Josias, Duke of Saxe-Coburg-Saalfeld, Eric XI of Sweden, Al-Muntasir, Katerina Sakellaropoulou, and Bertie Ahern. After him are Emperor Gong of Song, Latife Uşşaki, Emperor Seimu, Henry V, Duke of Bavaria, Augustus, Elector of Saxony, and Agis II.

Among people born in 1473, John Corvinus ranks 9. Before him are James IV of Scotland, Richard of Shrewsbury, Duke of York, Thomas Wolsey, Margaret Pole, Countess of Salisbury, Edward of Middleham, Prince of Wales, and Georg von Frundsberg. After him are Cecilia Gallerani, Henry IV, Duke of Saxony, Hans Burgkmair, Thomas Howard, 3rd Duke of Norfolk, and James III of Cyprus. Among people deceased in 1504, John Corvinus ranks 6. Before him are Isabella I of Castile, Stephen III of Moldavia, Filippino Lippi, Philibert II, Duke of Savoy, and Frederick of Naples. After him are Pedro Berruguete, Alvise Vivarini, Eberhard II, Duke of Württemberg, Mauro Codussi, and Garci Rodríguez de Montalvo.