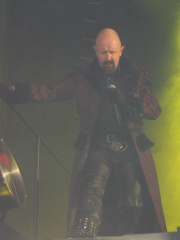 Robert John Arthur Halford (born 25 August 1951) is an English singer, songwriter and musician. He is best known as the lead vocalist of the heavy metal band Judas Priest, which was formed in 1969 and has received accolades such as the 2010 Grammy Award for Best Metal Performance. He has been noted for his powerful, wide-ranging voice and trademark leather-and-studs image, both of which have become iconic in heavy metal. Read more on Wikipedia

Since 2007, the English Wikipedia page of Rob Halford has received more than 2,494,495 page views. His biography is available in 36 different languages on Wikipedia making him the 223rd most popular singer.

Among singers, Rob Halford ranks 223 out of 3,001. Before him are Lola Flores, Christina Aguilera, John Denver, Ricky Martin, Nicolai Ghiaurov, and Milva. After him are Neil Diamond, Nena, Desireless, Dionne Warwick, Mariska Veres, and Sam Cooke.