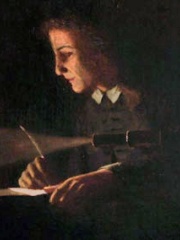 Jeremiah Horrocks (1618 – 3 January 1641), sometimes given as Jeremiah Horrox (the Latinised version that he used on the Emmanuel College register and in his Latin manuscripts), was an English astronomer. He was the first person to demonstrate that the Moon moved around the Earth in an elliptical orbit; and he was the only person to predict the transit of Venus of 1639, an event which he and his friend William Crabtree were the only two people to observe and record. Read more on Wikipedia

Among people born in 1618, Jeremiah Horrocks ranks 13. Before him are Jan Dirksz Both, Juraj Križanić, Peter Lely, Michiel Sweerts, Roger de Rabutin, Comte de Bussy, and Vittoria Farnese. After him is Abraham Cowley. Among people deceased in 1641, Jeremiah Horrocks ranks 14. Before him are Maximilien de Béthune, Duke of Sully, Johan Banér, Franciscus Gomarus, Pau Claris i Casademunt, Adam van Noort, and Hedwig of Denmark. After him is Thomas Heywood.