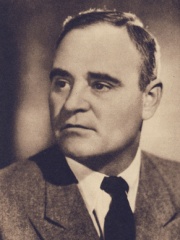 Gheorghe Gheorghiu-Dej (Romanian pronunciation: [ˈɡe̯orɡe ɡe̯orˈɡi.u ˈdeʒ] (listen); 8 November 1901 – 19 March 1965) was a Romanian communist politician and electrician. He was the first Communist leader of Romania from 1947 to 1965, serving as first secretary of the Romanian Communist Party (ultimately "Romanian Workers' Party", PMR) from 1944 to 1954 and from 1955 to 1965, and as the first Communist Prime Minister of Romania from 1952 to 1955. Born in Bârlad (1901), Gheorghiu-Dej was involved in the communist movement's activities from the early 1930s. Read more on Wikipedia

Among politicians, Gheorghe Gheorghiu-Dej ranks 1,759 out of 15,577. Before him are Akhmad Kadyrov, Nicolás Maduro, Olof Skötkonung, Charles, Duke of Vendôme, Simeon Saxe-Coburg-Gotha, and Conrad of Montferrat. After him are Ferdinand Karl, Archduke of Austria-Este, Uesugi Kenshin, Ladislaus IV of Hungary, Ali Abdullah Saleh, Conradin, and Chilperic II.