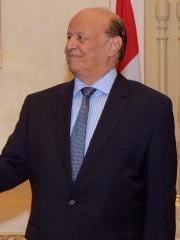 Abdrabbuh Mansur Hadi (Abdrabbuh Manṣūr Hādī; Arabic: عبدربه منصور هادي‎ Yemeni pronunciation: [ˈʕæbdˈrɑbːu mænˈsˤuːr ˈhæːdi]; born 1 September 1945) is a Yemeni politician and former field marshal of the Yemeni Armed Forces serving as the president of Yemen since 2012. He was the vice president to Ali Abdullah Saleh from 1994 to 2012. Although Hadi has international recognition, following the 22 January 2015 armed takeover by Houthis, his position as president of Yemen has been rejected by Houthis. Read more on Wikipedia

Abdrabbuh Mansur Hadi is most famous for his role in the Yemeni Civil War. He was a president of Yemen from 2012 to 2014. He was also a leader of the Southern Transitional Council.

Among politicians, Abdrabbuh Mansur Hadi ranks 2,480 out of 15,710. Before him are Lluís Companys, Paul Kruger, Palmiro Togliatti, Ephialtes, Servilia, and Infante Carlos, Count of Molina. After him are Elsa Einstein, Auguste Beernaert, U of Goryeo, Ernesto Cardenal, Decimus Junius Brutus Albinus, and Toghrul.