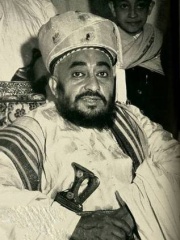 Ahmad bin Yahya Hamidaddin (Arabic: أحمد بن يحيى حميد الدين‎; June 18, 1891 – September 19, 1962) was the penultimate king of the Mutawakkilite Kingdom of Yemen, who reigned from 1948 to 1962. His full name and title was H.M. al-Nasir-li-Dinullah Ahmad bin al-Mutawakkil 'Alallah Yahya, Imam and Commander of the Faithful, and King of the Mutawakkilite Kingdom of the Yemen. Ahmad's ruthless, arbitrary and inconsistent rule made him the subject of a coup attempt, frequent assassination attempts and eventually lead to the downfall of the kingdom shortly after his death. Read more on Wikipedia

Among politicians, Ahmad bin Yahya ranks 9,929 out of 15,710. Before him are Flavia Titiana, Sneferka, Franz Schalk, Ramon Magsaysay, Giuseppe Motta, and Mesilim. After him are Merhotepre Sobekhotep, Ali Asadov, Giru of Baekje, Jaan Poska, Antonio Guzmán Blanco, and Nikolaos Andriakopoulos.