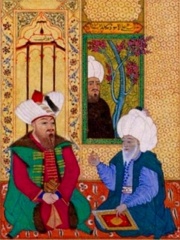 Alaeddin Bey, or Alaeddin Pasha (Alâeddin Paşa; Söğüt, 1290/1292 – Bursa, 1331), was the brother of Orhan I, who succeeded their father, Osman I Ghazi, in the leadership of the Ottoman Empire. His mother was a Turkish woman named Rabia Bala Hatun. It is not certain whether Alaeddin or Orhan was the elder son. Read more on Wikipedia

Among politicians, Alaeddin Pasha ranks 3,030 out of 15,710. Before him are Yeon Gaesomun, Wilhelm Miklas, Canute VI of Denmark, Moïse Tshombe, Philip I, Duke of Burgundy, and Wang Xizhi. After him are Valdemar, King of Sweden, Emperor Kōrei, Rudolf II, Duke of Austria, François Vatel, Óscar Arias, and Thorismund.

Among people born in 1250, Alaeddin Pasha ranks 6. Before him are John IV Laskaris, Manco Cápac, Arghun, Fra Dolcino, and Kitbuqa. After him are Marguerite Porete, Al-Muazzam Turanshah, Oghul Qaimish, Robert II, Count of Artois, Moses de León, and Pietro d'Abano. Among people deceased in 1330, Alaeddin Pasha ranks 3. Before him are Frederick the Fair and Joan II, Countess of Burgundy. After him are Pietro Cavallini, Elizabeth of Bohemia, Michael Shishman of Bulgaria, Roger Mortimer, 1st Earl of March, Ubertino of Casale, Isabella of Aragon, Queen of Germany, Alexios II of Trebizond, Yolande of Dreux, Queen of Scotland, and Euphemia of Pomerania.