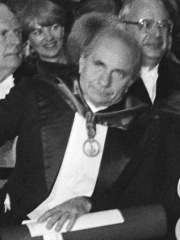 Georges Duby (7 October 1919 – 3 December 1996) was a French historian who specialised in the social and economic history of the Middle Ages. He ranks among the most influential medieval historians of the twentieth century and was one of France's most prominent public intellectuals from the 1970s to his death. Born to a family of Provençal craftsmen living in Paris, Duby was initially educated in the field of historical geography before he moved into history. Read more on Wikipedia

Georges Duby is most famous for his work on medieval European history. He is credited with popularizing the term "femme sole" in the late 20th century.

Among historians, Georges Duby ranks 80 out of 339. Before him are Eutropius, Donna Haraway, Julius Wellhausen, Ephorus, Timaeus, and Yuval Noah Harari. After him are Flavio Biondo, George Ostrogorsky, Shoqan Walikhanov, Al-Maqrizi, Sozomen, and Alois Riegl.