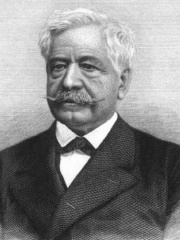 Ferdinand Marie, Count de Lesseps (French: [də lesɛps]; 19 November 1805 – 7 December 1894) was a French diplomat and later developer of the Suez Canal, which in 1869 joined the Mediterranean and Red Seas, substantially reducing sailing distances and times between Europe and East Asia. He attempted to repeat this success with an effort to build a Panama Canal at sea level during the 1880s, but the project was devastated by epidemics of malaria and yellow fever in the area, as well as beset by financial problems, and the planned Lesseps Panama Canal was never completed. Eventually, the project was bought out by the United States, which solved the medical problems and changed the design to a non-sea level canal with locks. Read more on Wikipedia

Ferdinand de Lesseps is most famous for his construction of the Suez Canal in Egypt, which opened in 1869.

Among DIPLOMATS In France

Among diplomats born in France, Ferdinand de Lesseps ranks 2. Before him are Charles Maurice de Talleyrand-Périgord (1754). After him are Édith Cresson (1934) and Jules Cambon (1845).