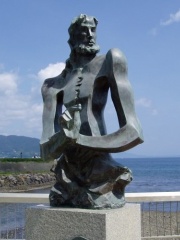 William Adams (Japanese: ウィリアム・アダムス, Hepburn: Wiriamu Adamusu) (24 September 1564 – 16 May 1620), better known in Japanese as Miura Anjin (Japanese: 三浦按針, "the pilot of Miura"), was an English navigator who, in 1600, was the first Englishman to reach Japan leading a five-ship expedition for a private Dutch fleet. Of the few survivors of the only ship that reached Japan, Adams and his second mate Jan Joosten were not allowed to leave the country while Jacob Quaeckernaeck and Melchior van Santvoort were permitted to go back to the Dutch Republic to invite them to trade. Adams, along with former second mate Joosten, then settled in Japan, and the two became some of the first (of very few) Western samurai.Soon after Adams' arrival in Japan, he became a key advisor to the shōgun Tokugawa Ieyasu. Read more on Wikipedia

William Adams, also known as Miura Anjin, was a navigator and explorer who helped the Tokugawa shogunate establish trade with the Western world. He is most famous for his role in the opening of Japan to the Western world.