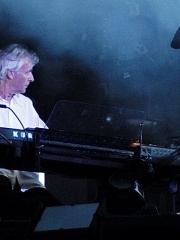 Richard William Wright (28 July 1943 – 15 September 2008) was an English musician who was a co-founder, keyboardist, and one of the vocalists in the progressive rock band Pink Floyd, performing on all but one of their albums and playing on all of their tours.Wright grew up in Hatch End, Middlesex and met future Pink Floyd bandmates Roger Waters and Nick Mason while studying architecture at the Regent Street Polytechnic, London. After being joined by frontman and songwriter Syd Barrett, the group found commercial success in 1967. Barrett was replaced by David Gilmour in 1968, who (along with Waters and Wright) took over songwriting duties. Read more on Wikipedia

Richard Wright is most famous for his novel Native Son, which tells the story of a young black man who is living in poverty in Chicago.