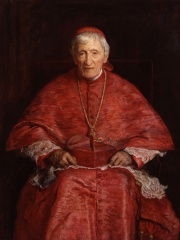 John Henry Newman (21 February 1801 – 11 August 1890) was an English theologian and poet, first an Anglican priest and later a Catholic priest and cardinal, who was an important and controversial figure in the religious history of England in the 19th century. He was known nationally by the mid-1830s, and was canonised as a saint in the Catholic Church in 2019. Originally an evangelical Oxford University academic and priest in the Church of England, Newman became drawn to the high-church tradition of Anglicanism. Read more on Wikipedia

Since 2007, the English Wikipedia page of John Henry Newman has received more than 1,255,419 page views. His biography is available in 40 different languages on Wikipedia making him the 694th most popular religious figure.

Among religious figures, John Henry Newman ranks 696 out of 2,001. Before him are Gregory Thaumaturgus, Zayd ibn Ali, Mikao Usui, Atiśa, Peter Chrysologus, and Jean Mabillon. After him are Nikephoros I of Constantinople, Theophilus of Antioch, `Abdu'l-Bahá, Saint Remigius, Francisco Jiménez de Cisneros, and Saint Eligius.