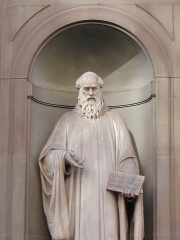 Guido of Arezzo (Italian: Guido d'Arezzo; c. 991–992 – after 1033) was an Italian music theorist and pedagogue of High medieval music. A Benedictine monk, he is regarded as the inventor—or by some, developer—of the modern staff notation that had a massive influence on the development of Western musical notation and practice. Perhaps the most significant European writer on music between Boethius and Johannes Tinctoris, after the former's De institutione musica, Guido's Micrologus was most widely distributed medieval treatise on music.Biographical information on Guido is only available from two contemporary documents; though they give limited background, a basic understanding of his life can be unraveled. Read more on Wikipedia

Guglielmo da Pisa, known as Guido of Arezzo, was a medieval Italian music theorist and composer. He is most famous for inventing the Guidonian hand, a system of musical notation that uses lines and spaces between staves to indicate pitch.

Page views of Guido of Arezzos by language

Among composers, Guido of Arezzo ranks 42 out of 1,216. Before him are Sergei Prokofiev, Johann Strauss I, Modest Mussorgsky, Jean Sibelius, Béla Bartók, and Camille Saint-Saëns. After him are Nikolai Rimsky-Korsakov, Gaetano Donizetti, Tomaso Albinoni, Jean-Baptiste Lully, Carl Maria von Weber, and Erik Satie.