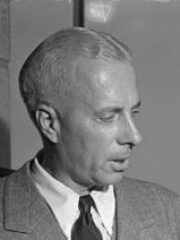 Howard Winchester Hawks (May 30, 1896 – December 26, 1977) was an American film director, producer and screenwriter of the classic Hollywood era. Critic Leonard Maltin called him "the greatest American director who is not a household name." A versatile film director, Hawks explored many genres such as comedies, dramas, gangster films, science fiction, film noir, war films and westerns. His most popular films include Scarface (1932), Bringing Up Baby (1938), Only Angels Have Wings (1939), His Girl Friday (1940), To Have and Have Not (1944), The Big Sleep (1946), Red River (1948), The Thing from Another World (1951), Gentlemen Prefer Blondes (1953), and Rio Bravo (1959). Read more on Wikipedia

Since 2007, the English Wikipedia page of Howard Hawks has received more than 1,060,705 page views. His biography is available in 47 different languages on Wikipedia making him the 70th most popular film director.