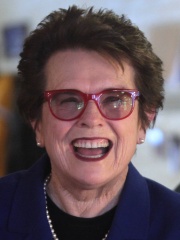 Billie Jean King (née Moffitt; born November 22, 1943) is the founder of the Billie Jean King Leadership Initiative, the Women’s Tennis Association and the Women’s Sports Foundation, and part of the ownership groups of the Los Angeles Dodgers, Angel City FC and the Los Angeles Sparks. She was named one of the “100 Most Important Americans of the 20th Century” by Life magazine and is a 2009 recipient of the Presidential Medal of Freedom. In her legendary tennis career, King captured 39 Grand Slam singles, doubles and mixed doubles titles, including a record 20 Wimbledon championships. Read more on Wikipedia

In 1973, Billie Jean King became the first woman to win a Grand Slam title. She was also the founder of the Women's Tennis Association.