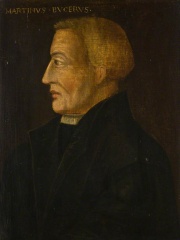 Martin Bucer (early German: Martin Butzer; 11 November 1491 – 28 February 1551) was a German Protestant reformer based in Strasbourg who influenced Lutheran, Calvinist, and Anglican doctrines and practices. Bucer was originally a member of the Dominican Order, but after meeting and being influenced by Martin Luther in 1518 he arranged for his monastic vows to be annulled. Read more on Wikipedia

Martin Buber was a philosopher and Jewish theologian who is most famous for his book I and Thou.

Among religious figures, Martin Bucer ranks 703 out of 2,272. Before him are Brother Roger, Abdullah ibn Saba', William Tyndale, Gertrude the Great, Nikephoros I of Constantinople, and Patriarch Kirill of Moscow. After him are Mary of Bethany, Nathan Söderblom, Catherine of Vadstena, Antipope Boniface VII, Maudgalyayana, and Ibrahim ibn Muhammad.