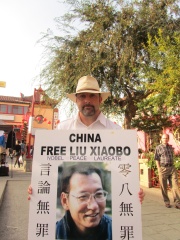 Liu Xiaobo (Chinese: 刘晓波 劉曉波; pinyin: Liú Xiǎobō; 28 December 1955 – 13 July 2017) was a Chinese writer, literary critic, human rights activist, philosopher and Nobel Peace Prize laureate who called for political reforms and was involved in campaigns to end communist one-party rule in China. He was arrested numerous times, and was described as China's most prominent dissident and the country's most famous political prisoner. On 26 June 2017, he was granted medical parole after being diagnosed with liver cancer; he died a few weeks later on 13 July 2017.Liu rose to fame in 1980s Chinese literary circles with his exemplary literary critiques. Read more on Wikipedia

Liu Xiaobo was a Chinese dissident, human rights activist, and literary critic. He was sentenced to 11 years in prison for "inciting subversion of state power" in 2009. He became the first Nobel Peace Prize laureate to be imprisoned in China.