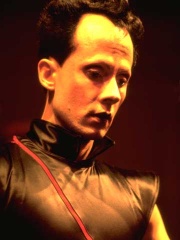 Klaus Sperber (January 24, 1944 – August 6, 1983), known professionally as Klaus Nomi, was a German countertenor noted for his wide vocal range and an unusual, otherworldly stage persona. Nomi was known for his bizarrely visionary theatrical live performances, heavy make-up, unusual costumes, and a highly stylized signature hairdo that flaunted a receding hairline. His songs were equally unusual, ranging from synthesizer-laden interpretations of classical opera to covers of 1960s pop standards like Chubby Checker's "The Twist" and Lou Christie's "Lightnin' Strikes". He is remembered in the United States as one of David Bowie's backup singers for a 1979 performance on Saturday Night Live.Nomi died in 1983 at the age of 39 as a result of complications from AIDS. Read more on Wikipedia