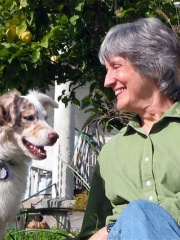 Donna J. Haraway (born September 6, 1944) is an American Professor Emerita in the History of Consciousness Department and Feminist Studies Department at the University of California, Santa Cruz, United States. She is a prominent scholar in the field of science and technology studies, described in the early 1990s as a "feminist and postmodernist". Haraway is the author of numerous foundational books and essays that bring together questions of science and feminism, such as "A Cyborg Manifesto: Science, Technology, and Socialist-Feminism in the Late Twentieth Century" (1985) and "Situated Knowledges: The Science Question in Feminism and the Privilege of Partial Perspective" (1988). Read more on Wikipedia