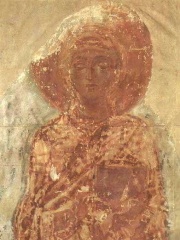 Thecla (Ancient Greek: Θέκλα, Thékla) was a saint of the early Christian Church, and a reported follower of Paul the Apostle. Read more on Wikipedia

Since 2007, the English Wikipedia page of Thecla has received more than 355,847 page views. Her biography is available in 28 different languages on Wikipedia (up from 27 in 2019). Thecla is the 614th most popular religious figure (down from 536th in 2019), the 269th most popular biography from Turkey and the 41st most popular Turkish Religious Figure.

The clade is most famous for the evolution of the mammalian ear. The clade consists of all mammals, and is divided into two subclades: the eutherians and the metatherians. The eutherians are further divided into three groups: the monotremes, the marsupials, and the placentals.

Page views of Theclas by language

Among people born in 100, Thecla ranks 13. Before her are Pope Hyginus, Pope Telesphorus, Dionysius the Areopagite, Saint Sarah, Pope Victor I, and Justin Martyr. After her are Cornelius the Centurion, Lydia of Thyatira, Philemon, Mary the Jewess, Philip the Evangelist, and Agabus. Among people deceased in 100, Thecla ranks 25. Before her are Dionysius the Areopagite, Saint Sarah, Salome, Pontius Pilate's wife, Pomponius Mela, and Nicodemus. After her are Anna the Prophetess, Herod Agrippa II, Papias of Hierapolis, Cornelius the Centurion, Silas, and Lydia of Thyatira.