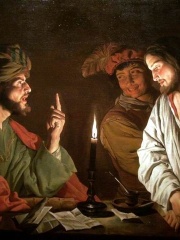 Since 2007, the English Wikipedia page of Caiaphas has received more than 1,493,961 page views. His biography is available in 41 different languages on Wikipedia. Caiaphas is the 275th most popular religious figure (down from 212th in 2019).

Caiaphas is most famous for being the high priest who presided over the trial of Jesus.

Page views of Caiaphas by language

Among religious figures, Caiaphas ranks 275 out of 2,238. Before him are Habakkuk, Gregory of Nyssa, Pope Martin IV, Ulfilas, Pope Sylvester III, and Moses in Islam. After him are Photios I of Constantinople, Rebecca, Saint Ursula, Pope Paul I, Pope Gregory V, and Pope Paschal II.