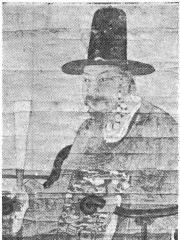 Seonjo of Joseon (26 November 1552 – 16 March 1608) was the fourteenth king of the Joseon Dynasty of Korea from 1567 to 1608. He was known for encouraging Confucianism and renovating state affairs at the beginning of his reign. Read more on Wikipedia

Seonjo of Joseon is most famous for being the second king of the Joseon Dynasty. He was born in 1567 and died in 1608. He was the son of King Seonjo of Joseon and Queen Inseon. His father was the ruler of Joseon before him. He was also the father of King Gwanghaegun, who ruled after him.

Among politicians, Seonjo of Joseon ranks 1,535 out of 15,710. Before him are Gannicus, Ladislaus I of Hungary, Dongmyeong of Goguryeo, Manco Cápac, Shah Rukh, and Prince Bernhard of Lippe-Biesterfeld. After him are Paul-Henri Spaak, Alexios V Doukas, Nicolás Maduro, An Lushan, Yolande de Polastron, and Constantine VI.

Among people born in 1552, Seonjo of Joseon ranks 6. Before him are Rudolf II, Holy Roman Emperor, Pope Paul V, Boris Godunov, Matteo Ricci, and Vasili IV of Russia. After him are Lavinia Fontana, Edmund Spenser, Hans von Aachen, Jost Bürgi, Henri, Prince of Condé, and Petrus Plancius. Among people deceased in 1608, Seonjo of Joseon ranks 3. Before him are John Dee and Giambologna. After him are Maria Anna of Bavaria, Charles III, Duke of Lorraine, Joachim Frederick, Elector of Brandenburg, Sigismund Rákóczi, Frederick I, Duke of Württemberg, Andrew Avellino, Bernardo Buontalenti, Ğazı II Giray, and Marie Eleonore of Cleves.