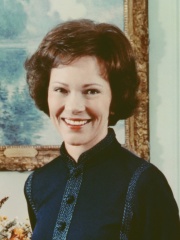 Eleanor Rosalynn Carter ( ROH-zə-lin; née Smith; born August 18, 1927) is an American writer and activist who served as First Lady of the United States from 1977 to 1981 as the wife of President Jimmy Carter. For decades, she has been a leading advocate for numerous causes, including mental health. Carter was politically active during her White House years, sitting in on Cabinet meetings. Read more on Wikipedia

Rosalynn Carter is most famous for being the wife of former President Jimmy Carter and for her work as a mental health advocate.

Among companions, Rosalynn Carter ranks 232 out of 673. Before her are Eleanor of Provence, Frederica of Baden, Christina of Holstein-Gottorp, Princess Clémentine of Orléans, Wahshi ibn Harb, and Constance of Sicily, Queen of Aragon. After her are Juliana Maria of Brunswick-Wolfenbüttel, Nazli Sabri, Eleanor of Castile, Sigrid the Haughty, Nur Jahan, and Francis, Duke of Cádiz.