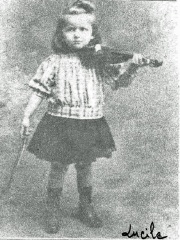 Lucile Randon (French: [ly.sil ʁɑ̃.dɔ̃]; 11 February 1904 – 17 January 2023), also known as Sister André (French: Sœur André), was a French supercentenarian. Living to the age of 118 years and 340 days, she had been the world's oldest verified living person since 19 April 2022, following the death of Kane Tanaka. She was the oldest known survivor of the COVID-19 pandemic, having tested positive for SARS-CoV-2 a month before her 117th birthday.Randon was a Catholic nun, having converted to Roman Catholicism as a young adult, working as a governess, teacher, and missionary before retiring at the age of 75. Read more on Wikipedia

Among religious figures, Lucile Randon ranks 752 out of 2,238. Before her are Thaïs, Angela of Foligno, Albert of Brandenburg, Brendan, Arnulf of Metz, and Mary of Bethany. After her are Saint Susanna, Bruno of Querfurt, Adrian and Natalia of Nicomedia, Gemma Galgani, Mikao Usui, and Abdullah ibn Saba'.