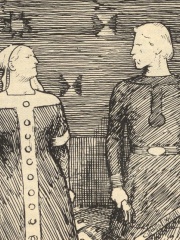 Sigrid the Haughty, also known as Sigríð Storråda (Sigrid Storråda in Swedish), is a queen appearing in Norse sagas as wife, first of Eric the Victorious of Sweden, then Sweyn Forkbeard of Denmark. Sigrid appears in many sagas composed generations after the events they describe, but there is no reliable evidence as to her existence as they describe her. The figure of Sigrid appears mainly in late Icelandic sagas, while more contemporary sources such as Thietmar of Merseburg and Adam of Bremen instead claim that Sweyn was married to a Polish princess, identified as Świętosława. Read more on Wikipedia

Sigrid the Haughty is most famous for being the daughter of Eric the Victorious, and the wife of Olaf the Stout.

Page views of Sigrid the Haughties by language

Among companions, Sigrid the Haughty ranks 224 out of 687. Before her are Hoelun, Eleanor of Aragon, Queen of Portugal, Empress Kōjun, Elizabeth of Austria, Juwayriyya bint al-Harith, and Marie of France, Countess of Champagne. After her are Pulcheria, Eleanor of Provence, Alberto Granado, Linda McCartney, Judith of Flanders, and Anne of Bohemia.